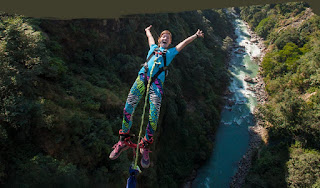 Bungee jumping is an activity in which a person jumps off from a high place (generally several hundred feet/meters) with one end of an elastic cord attached to his/her body or ankles and the other end tied to the jumping-off point. When the person jumps, the cord will stretch to take up the energy of the fall, then the jumper will fly upwards as the cord snaps back. The jumper oscillates up and down until the initial energy of the jump is dissipated.
Nepal offers a 500-foot jump over a tropical gorge in the Himalayas of Nepal along the Tibetan border. The Bhote Koshi, one of Nepal’s wildest rivers, rages below the steel suspension bridge that was specially designed for bungee jumping. The Swiss design can hold up to 4.5 tons of weight and is 545 feet wide, so there’s no need to worry about your safety (at least not before jumping…) The dense jungle and pristine forest surrounding the cliff top gorge offer a spectacular view, which many consider to be one of the most beautiful in the world.
Bungee Jumping : If you thought bungee jumping was restricted to some places in Europe, New Zealand and America, it’s time you got an update. The sport has finally found a natural home in the highest mountain range in the world. The ultimate thrill of a bungee jump can now be experienced in Nepal at perhaps the best site in the world.
Your jump can be arranged on arrival in Kathmandu. The jump, at 160m, was designed by one of New Zealand’s leading bungee consultants, and is operated by some of the most experienced jump masters in the business. It is considered mishap-proof. The agency takes safety “very, very seriously”.
Location
Less than 3 hours outside Kathmandu by Ultimate Bungee Shuttle. You will travel the Arniko (Kathmandu/Lhasa) Highway to within 12km of the Tibet Border and the famous Friendship Bridge.
The Gorge
Ultimate Bungee Nepal takes place on a 166m wide steel suspension bridge over the Bhoti Kosi River.
The Bridge
Swiss designed, especially for bungee jumping with a 4x safety factor. The bridge has a loading factor of 250kg per running meter. This means that the bridge will hold 250 x 166 = 41,500kg or 4.5 tons. And those are Swiss measurements! Over 6000 meters of steel wire was used to build this bridge, which is the longest suspension bridge in Nepal and joins two sides of a great valley. Before its construction, locals walked five hours to cross this river gorge.
Anyone who wants to take a taste of bungee jumping should not have any of the health problems mentioned below:
Day 01 : Drive to Last Resort from Kathmandu (3.5 hrs approx). Upon reaching, bungee jump at the Bhote Khosi River then drive back to Kathmandu.