Patan or Lalitpur,  (“Yala” as it is known by its inhabitants, the Newars) is one of the three great cities of the Kathmandu Valley, which is the historical center and cultural heart of Nepal. The settlement began as a number of villages situated on a fertile plain above the Bagmati River, probably threaded along a […]

Patan or Lalitpur,  (“Yala” as it is known by its inhabitants, the Newars) is one of the three great cities of the Kathmandu Valley, which is the historical center and cultural heart of Nepal. The settlement began as a number of villages situated on a fertile plain above the Bagmati River, probably threaded along a trail that can still be identified as a diagonal within the modern street pattern. The literal meaning of Lalitpur is “the city of fine arts”. It is best known for its rich cultural heritage, particularly its tradition of arts and crafts.

According to mythology, Patan was created in the 6th century by King Birdeva. He was instructed by Sarveshwara, a form of Shiva, to establish a city in the form of a yantra, an auspicious symbol having nine jewels in the center, eight protective deities on the periphery, and twenty four city sections. Likewise according to an another mythology, Patan city was designed and built after the Buddhist dharma Chakra.
Patan Museum 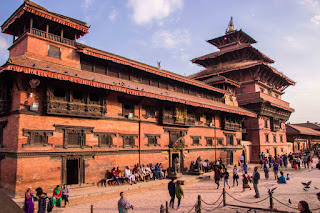 Patan Museum is housed in a courtyard within the Northernmost building complex of the Durbar area. The most picturesque setting of the palace that has been created in so small a place by piety and pride  is known now to the people as Keshav Narayan Chowk after a temple standing at the center of the courtyard dedicated to Keshav Narayan- a form of Lord Vishnu.This part is recorded in the history as Chaukot Durbar or four-cornered-fort-palace.
In an International Campaign by UNESCO for safeguarding the monuments of Kathmandu valley, the Austrian Government joined hands with Nepal Government to preserve Patan Durbar Square. The ensuing project began in 1982 with the repair of Keshav Narayan Chowk that led finally to the transformation of a teaching museum to dissemination of knowledge on Buddhism prevailed in Patan- city of Art and Architecture.
This is the first public museum in Nepal that has been created as an autonomous institution of this type managed by its own Board of Directors. The museum has been acclaimed, by the visitors, as one of the finest museums in South Asia. The popularity is growing day after day and is economically self sustained now.
The collaborative effort of Austrian Government with Nepalese counterpart did not only restore the historical palace to its original grandeur but also created a Model Cultural Institution in Nepal.
Krishana Mandir (Temple) 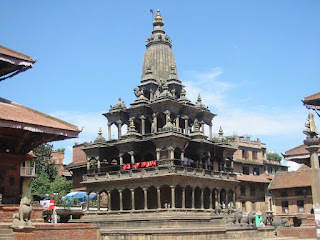 Krishna temple is the most important temple in Patan Durbar Square.It is built in the Shikhara style imported from India although it is unique in its own way. The stone carvings along the bean above the first and second floor pillar is most notable. The first floor pillar carvings narrate the events of the Mahabharata, while on the second floor there are visual carvings from Ramayana
The temple was built in 1637 by King Siddhi Narasimha Malla. It is said that one night the King saw the Lord Krishna and his consort Srimati Radha standing in front of the royal palace. He ordered a temple to be built on the same spot.[10] There are 21 golden pinnacles in the temple. Below the pinnacles are 3 stories. The first floor holds the main shrine of Lord Krishna with shrines of Radha and Rukmini at each side. The second floor is dedicated to Lord Shiva and the third to Lokeshwor(Lord Buddha)
The square is crowded with thousands of Hindu Pilgrims and devotees during Krishnastami.
Golden Temple 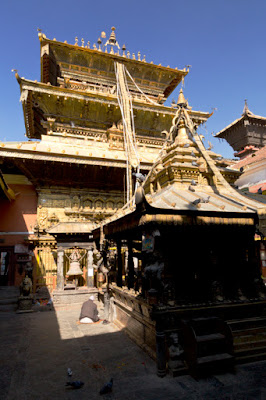 Golden Temple also known as the Hiranya Varna or Suwarna Mahavihara, this unique Buddhist monastery is just north of Durbar Sq. Legends relate that the monastery was founded in the 12th century, although the earliest record of its existence is 1409. The doorway, flanked by gaudy painted guardian lions, gives no hint of the magnificent structure within. The inner courtyard has a railed walkway around three sides and the entry is flanked by two stone elephants. Shoes and other leather articles must be removed if you leave the walkway and enter the inner courtyard. Look for the sacred tortoises pottering around in the courtyard – they are temple guardians. The main priest of the temple is a young boy under the age of twelve, who serves for 30 days before handing the job over to another boy. The large rectangular building has three roofs and a copper-gilded façade. Inside the main shrine is a beautiful statue of Sakyamuni. In the far right of the courtyard is a statue of Vajrasattva wearing an impressive silver-and-gold cape. In the centre of the courtyard is a small, richly decorated temple with a golden roof that has an extremely ornate gajur. Inside in the oldest part of the temple is a ‘self-arisen’ chaitya. The four corners of the courtyard have statues of four Lokesvara and four monkeys, which hold out jackfruits as an offering. On the south side is Tara. A stairway leads up to a upper-floor chapel lined with Tibetan-style frescoes. Finally, as you leave the temple, look up to see a Kalachakra mandala carved into the ceiling.
Kumbeshwar Temple

Due north of Durbar Sq is the eye-catching Kumbeshwar Temple, one of the valley’s three five-storey temples. This tall, thin mandir (temple) features some particularly artistic woodcarving, and it seems to defy gravity as it towers above the surrounding houses. Amazingly, this precarious structure survived the earthquake, though the top tier toppled in May 2015 and the tower is now leaning slightly. A large Nandi statue and central lingam indicate that the shrine is sacred to Shiva.
The temple platform has two ponds whose water is said to come straight from the holy lake at Gosainkund, a weeklong trek north of the valley. Bathing in the tank at Kumbeshwar Temple is said to be as meritorious as making the arduous walk to Gosainkund.
The surrounding square is dotted with temples sacred to Bhairab and Baglamukhi (Parvati). Local women gather at the tank known as Konti Hiti to socialise, wash clothes and fill up their water jugs. Down an alley to the north of the temple is the Kumbeshwar Technical School .
From here you can detour north to see the Northern Stupa, one of four marker shrines showing the old city limits of Patan.
Jagat Narayan Temple

On the bank of Bagmati river near the Ghat, peacefully located inside a huge courtyard is a beautifully built Shikhara style terracotta temple dedicated to Lord Vishnu popularly known as Jagat Narayan.
This 19th century temple was built by the member of a rich Rana family named Jagat Sumshere who was a great devotee of Lord Vishnu. It is said that he named this temple as Jagat Narayan to demonstrate his devotion to Lord Vishnu.
Some of the important structures located in this temple complex include the skillfully sculpted stone statues of Vishnu set in the main body of the temple along with the life size statue of Hanuman, Garuda and Ganesh, a bronze Garuda pillar plus a stately priest house with many lavishly carved wooden windows.

Mahabuddha temple is a Buddhist temple made up of terracotta, This 500 year old temple can be taken as the treasury of Nepalese art and craft. The Mahabuddha temple is a great pilgrim for the Buddhist practitioners. Buddhists from all over the world come, worship the Buddha and feel eternal peace and satisfaction. The temple has proven to be a wonder to the cultural and archeological tourists. 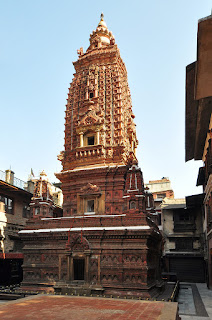 This ancient historical temple is constructed under a typical architectural style called “Shikhar saili”. The temple is build up of terracotta, each consisting Buddha images and other arts. Such terracotta is made up of very special material composing extracted clay, herbs and others to make the terracotta strong and pure, These terracotta are rather attached to each other with norma mud or cement but with a special mixture of different herbs etc. called “vajra”. The temple composes of thousand Buddha statues. So it is even called “sangetongu” in Tibetan language meaning “temple of thousand Buddha”. The temple is probably the best and first temple built up of terracotta in the country.
On the ground floor of the temple the icon of shakyamuni Buddha displaying earth touching gesture is established. On the first floor Amitabha Tathagata is installed. Similarly, on the second third fourth and fifth floor Pancha Jinalaya Swayambhu Chaitya, Dharmadhatu Mandala, Vajradhatu Mandala, and sunyani ranjan Chaitya are established respectively. The temple is surmounted by Usnish Cudamani swarna chaitya the total height of the temple is about 60 feet.
In this locality , the temple of Akasha Jogini Shree Vidhya Dhari Devi is already exist where the lord of knowledge Manjushree also  present before the construction of Mahabuddha temple the old manuscript of Prajnaparamita is also preserved here and daily recited . Because of these three auspicious aspects it is believed that the people of this locality could gain popularity in the field of Shilpa Vidya Knowledge. The five sons of Pt. Abhaya Raj Shakya or their family members carry out the daily rituals worships of the Vidyadhari and Mahabuddha temple for one month turn by turn

Ashok Stupa
According to legend five Stupas were built by Ashoka, the Mauryan King of India, while he was visiting Patan on a pilgrimage. At that time Nepal was ruled by the Kirat Kings. These Stupas were often built upon a mound of earth covered with grass. The four Ashokan Stupas in Lalitpur are at Lagankhel in the south, Imadol in the east, IBahi in the north and Pulchowk in the west.
Machhendranath Temple
Machhendranath temple is situated in Gabahal, Patan.  Machhendranath is very important god in Patan as he is a god of many guises and associated with the rain.