Perched atop a hill on the western edge of the Kathmandu Valley, the ancient Swayambhunath Stupa (known to tourists as the Monkey Temple) is Kathmandu’s most important Buddhist shrine. The sleepy, all-seeing Buddha eyes that stare out from the top have become the quintessential symbol of Nepal. History of Swayambhunath Stupa When this temple was […] 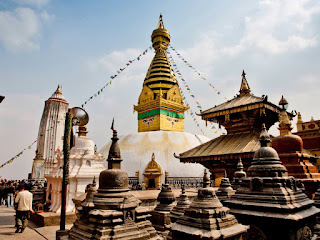 Perched atop a hill on the western edge of the Kathmandu Valley, the ancient Swayambhunath Stupa (known to tourists as the Monkey Temple) is Kathmandu’s most important Buddhist shrine. The sleepy, all-seeing Buddha eyes that stare out from the top have become the quintessential symbol of Nepal.
History of Swayambhunath Stupa
When this temple was founded about 2,000 years ago, Kathmandu Valley was filled with a great lake. According to Buddhist legend, a single perfect lotus grew in the center of the lake. When the bodhisattva Manjusri drained the lake with a slash of his sword, the lotus flower settled on top of the hill and magically transformed into the stupa. Thus it is known as the Self-Created (swayambhu) Stupa.
The earliest written record of the Swayambhunath Stupa existence is a 5th-century stone inscription, but scholars believe there was probably a shrine here as early as the 1st century. Even before that, it is likely that animist rites took place on this hill. Swayambhunath is one of Nepal’s oldest Buddhist temples and it has an ancient atmosphere, especially when one approaches on foot with the pilgrims.
365 ancient steps

The primary approach to the temple is from the eastern side, where 365 ancient steps lead up the steep forested hillside. The base is about a 20-minute walk from the center of Kathmandu. This staircase is the only route pilgrims would consider and is the most memorable way for any visitor to experience the stupa. However, an alternative is to drive or take a taxi to the west side, where there are only a few steps to climb to the top.
Gate 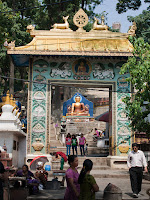 At the bottom of the eastern stairway is a brightly painted gate containing a huge Tibetan prayer wheel nearly 12 feet tall. It takes two people to turn it and a bell sounds during each revolution. Around the gate are dozens more smaller wheels. Devotees spin prayer wheels to release prayers and mantras to heaven – visitors are welcomed to do so as well.
Buddha statues
The staircase is presided over by three painted Buddha statues from the 17th century near the base (women perform prostrations before them in the early morning); another group further up are from the early 20th century.
Mani stones
Strewn along the staircase are numerous mani stones, inscribed with the Tibetan mantra Om mani padme hum (“Hail to the jewel in the lotus”). Merchants sell smaller versions of the stones to tourists. The stairs run through a beautiful forest, which is populated with the hundreds of monkeys that give the temple its nickname.
Buddhist symbolism
The central buildings and decorations of Swayambhunath are rich with Buddhist symbolism. The whitewashed dome of the main stupa represents the womb of creation, with a phallic complement in the square tower. Rising from the tower is a spire made of 13 golden disks, representing the steps to enlightenment. The umbrella on top symbolizing enlightenment itself; some say it contains a bowl of precious stones.
Buddha eyes
The famous Buddha eyes gazing out sleepily from each side of the tower (oriented to the four cardinal directions) are those of the all-seeing Primordial Buddha. Between each of the pairs of eyes is a symbol that looks like a question mark – this is the Nepali number “1” and represents the unity of all things. Gold plaques rising above the eyes like a crown depict the Five Dhyani Buddhas, celestial buddhas who are associated with the five senses, the four cardinal directions plus the center, and many other symbolic groups of five.
Shrines
The Five Dhyani Buddhas are further honored with special shrines at the base of the stupa. They face the four cardinal directions, plus one slightly left of east to represent the center direction. Between them are shrines to four of the Buddhas’ consorts. Linking all nine shrines together is a chain of prayer wheels and butter lamps. The five main shrines are enclosed in beautiful gilded copper repoussé work, for which the Kathmandu Valley is renowned.
Filling the platform around the main stupa are numerous other shrines and votive structures, most of which have been donated by kings and lamas in the last four centuries. Five of them are associated with the five elements: earth, air, fire, water and sky.
Harati Devi Temple 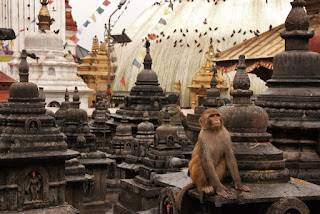 Notable among these is the Harati Devi Temple, dedicated to the Hindu goddess of smallpox and other epidemics, as well as a protectress of children. The small brick pagoda is very popular among both Hindus and Buddhists, especially mothers seeking blessings for their children.
Petitioners toss flower petals, rice, colored powder and holy water over the Harati image, then receive a tika from the resident priest. Monkeys, stray dogs, and pigeons fight over the rice and the food offerings, contributing to the chaotic atmosphere. The image of the goddess dates only from the 19th century; it replaces the original that was smashed by King Rana Bahadur Shah after his wife died of smallpox.
Gompa (Monastery prayer room)
Food offerings for Harati (typically stew, rice and bread) are cooked in a kitchen on the bottom floor of a gompa (monastery prayer room) on the west side of the complex. Visitors can climb stairs to the gompa roof, which is level with the Buddha eyes. From here there are fine views over the stupa and Kathmandu valley.
Shantipur
Northwest of the main stupa is another important shrine, associated with a fascinating legend. Shantipur is a small, plain, box-shaped temple said to contain a great treasure – a living holy man who has been meditating in there for 1500 years. Legend has it that Shanti Shri, who lived in the 5th century, locked himself in a vault beneath the temple, vowing to remain there until the Kathmandu Valley needed him. Entering a mystic state, he has achieved immortality and remains there to help the local people when needed.
In 1658, King Pratap Malla descended into the chamber alone to seek Shanti Shri’s help with a drought. The king reported making his way through several underground rooms, each more frightening than the last. The first contained large bats and hawks, the second was home to hungry ghosts that clutched at him in agony, and the third was full of snakes that chased him until he pacified them with milk. The king found the saint in the last room, skinny as a skeleton but still alive and meditating. Shanti Shri presented the king with a mandala, which brought the needed rain.
The outer sanctum of the rather ominous temple can be visited. It is decorated with faded frescoes from the Swayambhu Purana, a 17th-century scripture that recounts the creation myths of the Kathmandu Valley. Shantipur is also called Akashpur (Sky Place) and it represents the fifth element.
Pratappur and Anantapur
The two bullet-shape temples (shikra) on each side of the stupa, known as Pratappur and Anantapur, were given by King Pratap Malla to help him earn a victory over Tibet in the 17th century. The story of his success is inscribed on the twin bells in front.
Shree Karma Raj Mahavihar
At the northeast corner of the complex is the Shree Karma Raj Mahavihar, an active Tibetan monastery with a big Buddha statue and yak butter candles lit by pilgrims. The resident monks chant around 3 or 4pm daily. The northwest corner is home to Agni Pur, a neglected shrine to the ancient Hindu fire god Agni, who relays burnt offerings to heaven. Between these two, north of the main stupa, is Nagpur, a small tank with a snake idol at the bottom. This helps appease the valley’s notorious snake spirits.
Vajra (Thunderbolt)
At the top of the eastern steps is a great bronze vajra (thunderbolt), a Tantric symbol of power, decorated with the signs of the Tibetan zodiac.

Three Buddha Park
The Buddha Park near Swayambhu Stupa recently built three Buddha statues. In the center the Amitabha Buddha statue measure 20.4 meters (67 feet) this representation of Buddha is the biggest Buddhist statue in Nepal. At his left side we can see Avalokiteshvara who represent “the Lord who looks down” and to the right Padmasambhava also known as Guru Rinpoche. These two Buddha variation are 19.5 meters (64 feet) high each.

The weather is most pleasant in Kathmandu in spring and fall. Swayambhunath is most atmospheric in the morning (before 9am), when it hosts more pilgrims than tourists. If possible, visit on a Saturday, the only day Nepalis have off from work. This is the primary day of activity around the Harati and other shrines.
The two main festivals celebrated at Swayambhunath are Buddha Jayanti(in April or May) and Losar (in February or March). During these times, many pilgrims visit the temple and the monks create a lotus pattern on the stupa with saffron-colored paint. Also important is the month-long Gunla celebration (August or September) marking the end of the rainy season.