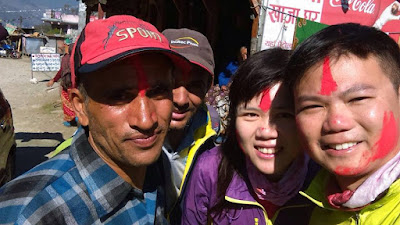 Holi is considered as one of the major festival of Nepal which falls on the full moon day of late February or early march. Also known as Fagu Purnima, the festival of Holi got its name from a mythical demoness Holika. It is the festival of colors that lasts a week but only last two days are celebrated with colours.

A long bamboo pole with strips of clothes tied at its top is installed on the first day, in the Hanuman Dhoka Durbar Square in Kathmandu. The pole is known as Chir. It symbolises the tree on which Lord Krishna hung the milk maids’ clothes while they were bathing in the Jamuna River in northern India.
On the last day of the week, the pole is taken to a bonfire. According to the legends, Holika and her brother King Hiranyakashyap planned to kill his son. The King was proud of him and considered himself God. His son Pralad was a great devotee of Lord Vishnu and he never acknowledged his father as God unlike all the citizens of the country. Afraid that others might follow the suit and angry at his son, he and Holika conspired to kill Pralad.  Holika had received blessing from Lord Bramha that fire could not burn her. So she took Pralad in her lap and sat on top of the hay stack. But the blessing only worked for good purpose, so, she burnt alive. Pralad was saved by Lord Bishnu. Thus, Holi is celebrated to remember the victory of devotion over evil.
People in Terai region and the Marwari communities of Kathmandu celebrate it a day later than the Hilly regions. Holi is considered as the festival of forgiveness because people forget their anger and enjoy coloring each other. They put color, splash each other with water and hit each other with water balloons. Also hitting strangers with balloons and water is practices. Maalpuah, a special type of soft roti is the main food of the occasion. People also indulge themselves in Bhaang and alcohol during Holi.
For the Date and time please mail us we will inform according to our moon calendar